Dematté's art represents a turning point in the international artistic scenery. The techniques he adopts, the materials he chooses for his works, make this artist a tireless polyhedric explorer of new artistic representations. Inside an extremely multifaceted expressive language the explosive effect of a decisive aesthetic research is asserted, determined to get out of all the traditional creations. The spirit of the artist's investigation is already visible in the "Generazione" ("Generation", 2011) works group, in which we find an exhilarating abstract work made of enamels. Through an inherent design balance, the forms expressed through the chromatic black and blue contrast and animated by a clean white coloured background, seem to vibrate leaning beyond the structure that contains them. It is a search of concreteness in three-dimensional space which will be increasingly evident in his artistic career through the use of the collage technique. The work "Rilievi" ("Reliefs", 2011) is characterised by a strong aesthetic appeal. A candid scenario, composed of a soft fabric, animates vibrating ripples resembling body footprints. It is about energy waves freed from the sapid connotation of body physiognomy, that give the impression of leaping supplely from the canvas. Collage art has often accompanied last century's aesthetic movements, but with Dematté it takes on new features and different chances of expressions.

In the cycle of works "Costruzione" ("Construction", 2012) this technique is used with absolute mastery aiming at creating an artistic composition which is completely detached from the two-dimensionality of the canvas to flow towards the reality of reality. Collage in these works becomes more and more a sort of miniature installation meant to host plastic materials which extend beyond the plane space of representation. Standing out in the artistic compositions "Costruzione" is a rich inlay of small woods chromatically exalted by white or black which, stuck in layers, through a completely autonomous expressive language, stand up from the two-dimensional surface, from which they are born in order to call to mind pure geometrical essences. The collages are built on white backgrounds. Such colour vigorously enhances the shadows of the materials of the composition, giving life to dark natural shapes that seem to become magnetic force fields aimed at supporting the material elements of the handwork, superimposed on each other. In Dematté's works we find the desire to explore three-dimensional space, but we also find a run back, depths, often to underline deep meanings related to human beings. 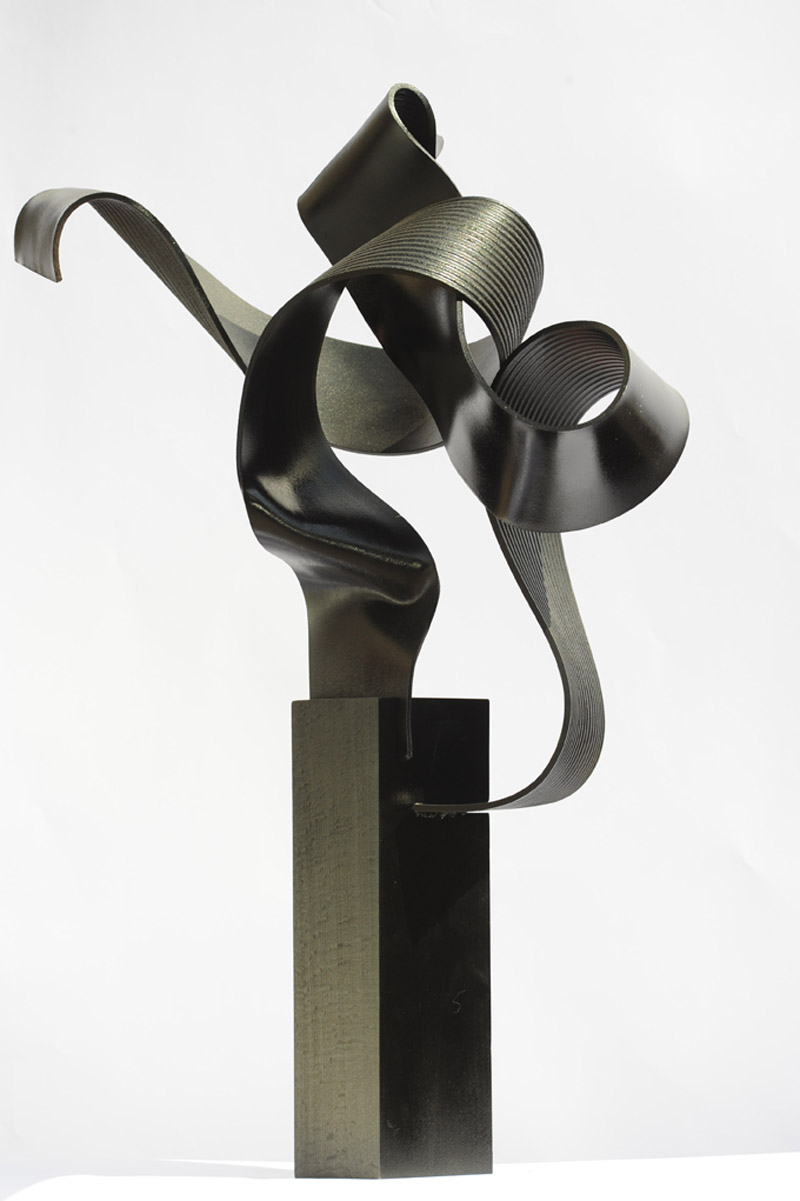 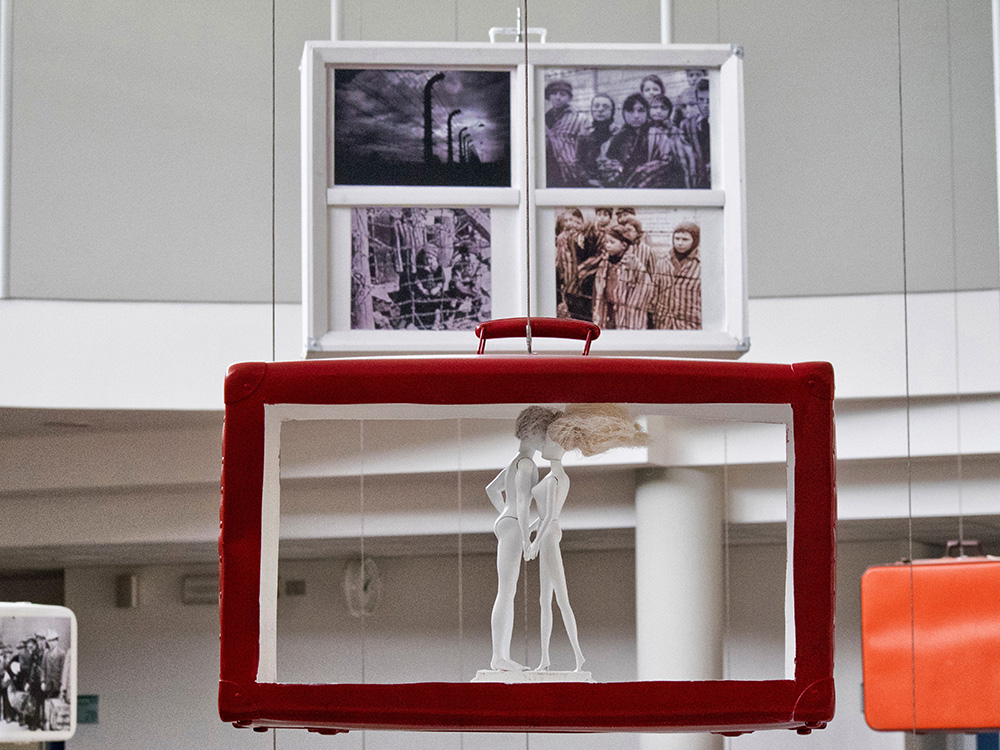 In the fanciful works "Costruzioni viaggianti" (Traveling constructions, 2013), a real 24-hours becomes a splendid rich in data and social knowledge information collector. With the briefcase which frames nice figures recalling the human being, the artist conceptually achieves the body of the world in its hectic current events, representing the "here and now" of a daily life in constant movement governed by the chaos of the crowd. The cycle of "Costruzioni contemporanee" ("Contemporary constructions", 2014) is amazing, developed by an innovative artistic language. In these works the objects directly taken from reality, through collage, express inventive and surprising aesthetic possibilities. The real elements do not lose their consistency becoming anonymous, rather, through a creative use of colour, introduce an ambiguous game between recognizability and unrecognizability. The back of a chair, some jeans zips, some fabrics, and any waste item, which could also be a cigarette butt, are pasted in the space of the representation through a kind of witty construction assembly which, enhanced by moments of painting, is loaded with a highly expressive aesthetic pleasure.

The collage process takes a new connotation which becomes more and more radical in the work "Compressioni" ("Compressions", 2014). The selected items are not pasted on the canvas, but they are pressed inside a folder, isolated from world to enter the neutral space of art. Bags and bags for women, pressed by the artist through a refined positioning game, underline two overlapping photographs of different sizes, that highlight a bedroom and the gash of a female figure. Overall the folder becomes a window where you can see a domestic landscape and the handbags not only assume theatrical aesthetically stimulating contortions, but they also become coloured streaks, designed to animate and tell one of the usual aspects of daily life.

Starting from the surface, the alpha form of the artist's linguistic experiments, a series of many more expressive possibilities are declined, also poured into the realization of sculpture works. The complete absence of figuration and the adherence to a language which is part of the informal research channel of the second part of the 20th century, lead the artist to create sculptures which are vivified by original material.

In the series of sculptures "Evoluzione" ("Evolution", 2011-2012), woodn, a new generation composite wood, mainly used in architecture for interior and exterior coverings, changes into a sensitive element of artistic type. Woodn, placed on a delicate iron base, moulded through bands and eversions gives the impression to penetrate into the atmospheric environment. The aesthetic factor in these works is amplified by natural light, which shapes the modular forms of the composition, charging them with very pure creative energy which welcomes and reflects impregnated with shiny colours atmospheres. We also find modular beauty in the sculpture "Proiezioni" ("Projections", 2014). 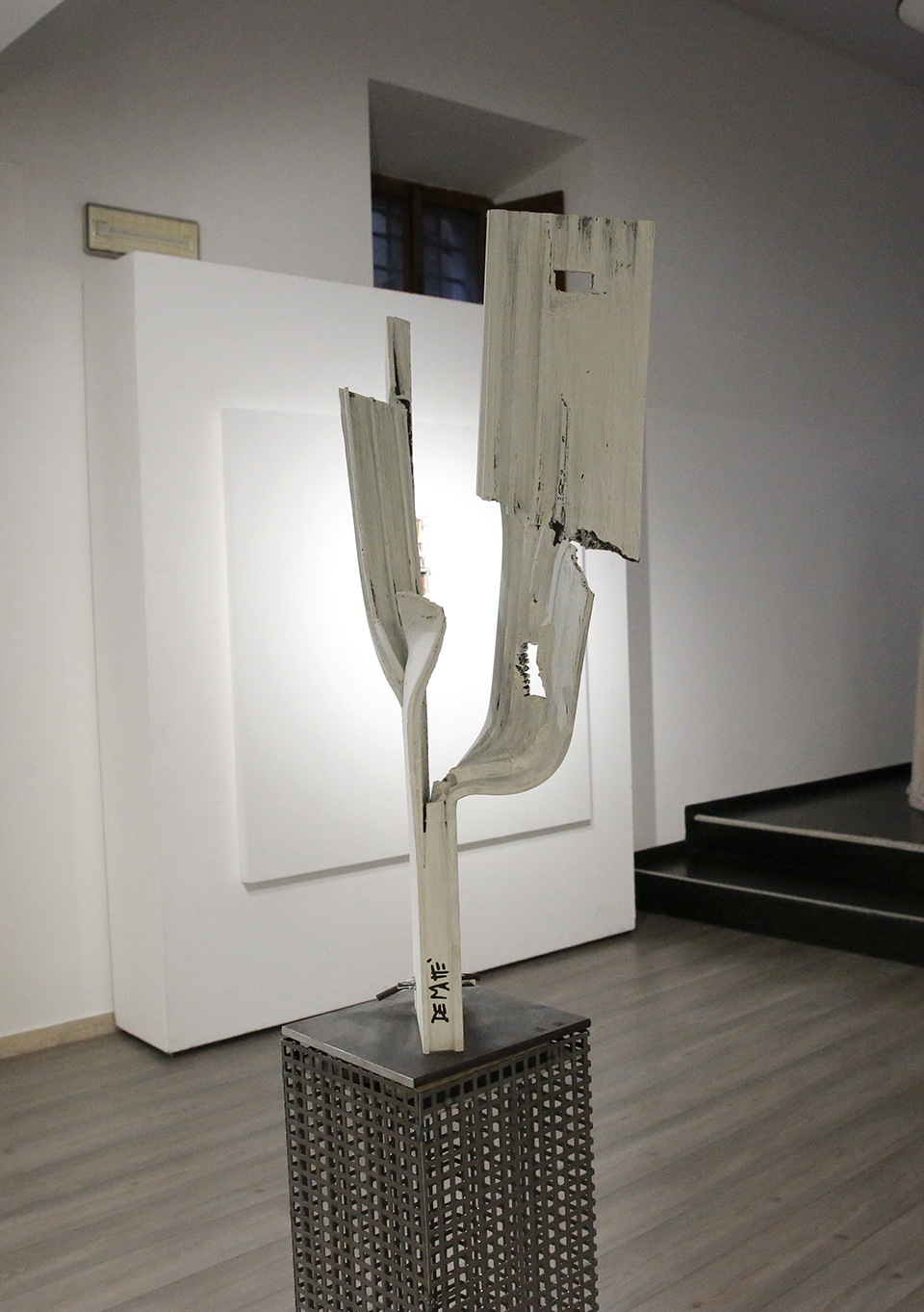 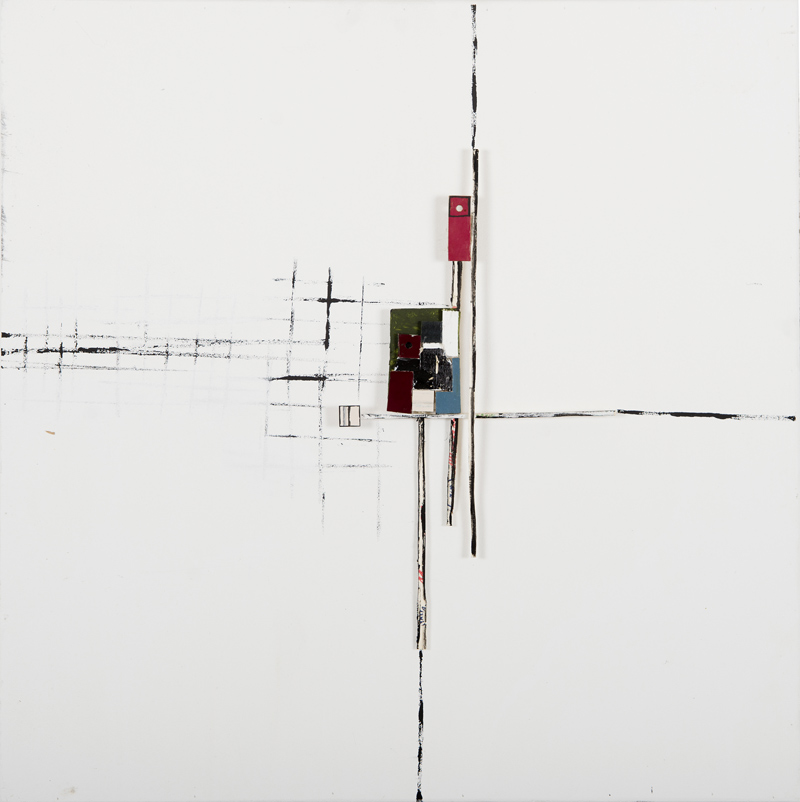 The dimensions, the elongated shape, the engraved woodn burst, enhanced by black and white shades, make this work a symbol of elegance. in Dematté's sculptures forms lose the heavy consistency of the substance they are made of, to become natural ribbons of unpredictable beauty dancing in the air. Light, forms and colours with woodn become protagonists of a new aesthetic and visual dimension. Mirko Dematté overcomes the sensitizing of traditional arts, substituting them with new means of writing, of "concreteness".
His art docks in the third but also the fourth dimension, through a kind of kinetic effect which results from the fusion of materials in space and time.